Gateway to Holland and Bulwark of the Netherlands

As an enclave of the Dutch Republic between the Spanish - from 1713 the Austrian- Netherlands and the principality of Liege, and situated on the banks of the Maas, one of the principal strategic lines in the 17th and 18th centuries, Maastricht possessed great political and strategic importanbce for the States-General. "The Key to Brabant" in the 16th century, it now beame the "gateway to Holland ", an isolated barrier fortress which had to ward off or hold up the enemy - firts Spain, after 1648 France - heading for the southern frontier of the Republic. In addition it played an important role - notably in the Spanish war of Succession (1701-1713) -as an arsenal, a base for sorties, and a point of communication for the allied troops. Its defence was entrusted to a garrison numbering 4000-5000 men on average, under the command of a military governor, who was appointed by the States-General from among the members of the higher European nobility. The Hoofdwacht (main gard house) in the Vrijthof square, where the colourful parades were held, some other guard houses built in the neoclassical style of the 18th century, street names borrowed from the soldiers'barracks, and also the origins of the town theatre, still recall the time when the military element put its stamp on day-to-day life in the town. 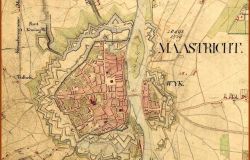 Five times the fortress was besieged after 1632, hree times it was taken by the French: in 1673 it came into the hands of Lois XIV in a surprisingly short time; in 1748, after a rather spiritless defence, it fell to marshal Maurice of Saxony; in 1794 it was taken by republican troops under general Kleber. The French interst in Maastricht has left a unique monument in the 39 m2 model of the town and its fortifications made in the years 1748-1752 and now kept in the Musée des Plans-Reliefs in Paris. An exact copy canb be seen in the Maastricht Bonnefanten Museum.