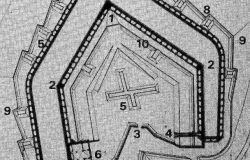 After the second masonry enceinte had been taken into use around 1380, the inner wal reaminded of military importance as a reserve line of defence, until, after 1632, the main defence positions were moved to the forefield. Only the Maas wall, which was incorporatede in the second enceinte, remained part of the fortification system proper. The souternd part of this wall , teh Onze Lieve Vrouwewal, with five passages to the quay, so-called posterns, was saved from demolation in 1905, in the nick of time. A large part of the first city wall has disappeared; of the twelfe towers that are known to have existed, only the one on the Lang Grachtje (long ditch), and the Jekertoren near the Maas - partly renovated in 1911- now remain. The gate buildings, which had meanwhile served as guid house, gaolhouse or storage rooms for bombards and gunpowder, were demolished the one after the other, except the Helpoort, the only 13 th. c gatehouse that has surveived the adversities of time.